Everything happens for a reason and when you are in the pursuit of something, the best things can happen on your way to achieve your goals. At least, this always happens to me when learning or researching about something. A teacher must be a natural born learner and, in fact I learn a lot from my students. 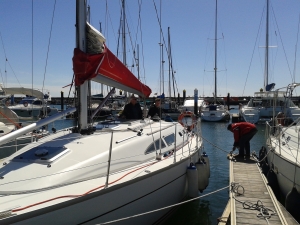 This time we went to follow Christopher Columbus departing paths and did some sailing by the shores which witnessed his departure with the 3 caravels around the wharf from which he and his crew departed blessed and sponsored by the Catholic Kings Ferdinand and Isabella.

On the way to the marina we crossed San Juan del Puerto, Moguer (Juan Ramón Jiménez town of origin) and Palos de la Frontera. All these towns live of Strawberry farming and fishing. 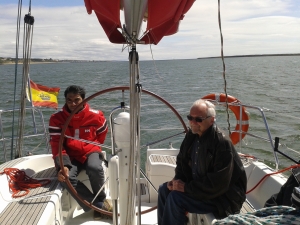 Bruce and our captain, Raul

We had a very relaxing morning in which we sailed just with the Genova due to the powerful wind we faced, But our captain is an experienced one which has already crossed the Atlantic and been sailing most of his life. So our paseo was smooth and comfortable.

Off our little ocean session, from where we had a different perspective of Spain’s shores, left Raul and went to eat lunch at Nino’s Tavern. A famous and almost always crowded restaurant where you can enjoy the best products of Huelva Province, the nicest pork grilled meats and amazing seafood. We ate a lot and we were in the need of a coffee, but we decided to take it at the Three Caravels wharf in Palos de la Frontera. 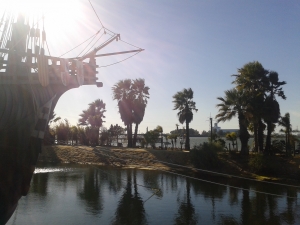 There is a museum where the replicas of the first expeditions boats: La Pinta, la Niña and La Santa María. We went through the wharf and the museum feeling the vibe and mood of the XV century travelers which encountered America on their way to India. 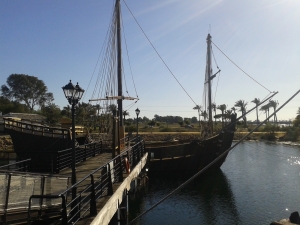 Just to finish a short story on how Columbus gathered crew among Palos’ sailors: It was hard to convince those sailors about the roundness of the earth so he would throw a bet saying he was able to make an egg stand without any support and those who bet against and loose would go with him on his crazy trip. Most of them took the bet, as they where brave men, and he just used a boiled egg for his purpose of keeping it standing up just by cracking it a bit on the bottom part…

Smart fellow who gained respect by his demonstrations and persuasive arts, getting to discover the Americas with all the consequences this event had to the rest of humankind.