Día de la Hispanidad is celebrated in many countries in the world. As I posted in last October 12th article, it represents the feature of most union within Spanish speaking countries: THE SPANISH LANGUAGE. I t is the feature which identifies most users of this universal language. It is a day for feeling proud of our cultures and how they had spread and varied during the passing of years since Christopher Columbus arrival to La Española (Currently Dominican Republic).

Celebrated in different ways, this day unites a quite good number of proyections of the Spanish Empire’s cultural output and encounters with the new world. For having an idea of this we just need to take a look of the different names the day has taken in every country where is celebrated in some way.

Here you can get an idea of how varies are the celebrations. But what really calls my attention is that this day unites Hispanic inmigrants in non-Hispanic territories like for example, the city of New York in USA. They have a huge parade in 5th Avenue and there is this show where they introduce different clothing, costumes, folklore music, reading activities, music and dances form all around the Hispanic world. 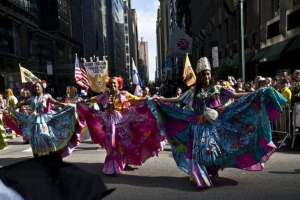 It is even more celebrated there than in other hispanic countries like Cuba, where it is not even a national holiday. Well, I guess this is due to the individualism that characterizes the Hispanic Spirit.

I already told about how is celebrated in Spain in my last October 12th post, but 2014 is going to be different as we have a brand-new king so that is going to make it exciting. 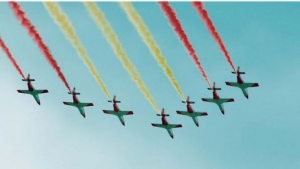 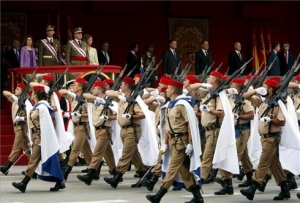 Militar Parade in front of the Royal House and Government members

I wish you enjoy this day with the best enthusiasm, respect, joy and “Hispanic way” 😉

So play music in Spanish, dance, Join Spaniards, Argentineans, Colombians, Mexicans, Puerto Ricans, etc, cook a recipe, or go to a parade if you can. It will make you feel the Spanish language through the senses and get to understand our united variety of cultural expressions. All together but all different.