Not many people know, including Sevillians, that the origins of Sevilla, formerly known as Hispalis, Isbilya, etc, weren’t founded where the city is settled nowadays. Everything, related to its significant importance in terms of civilization started 9 km NW from where it is now. The Romans established the city of Itálica 2200 years ago in the northern part of the Aljarafe.

This is due to the fact that the river bed was wider and had a different orientation so they took advantage of what the Guadalquivir (called Betis in those times) could offer them.

Last week we went with Bev & Bruce to the Roman Ruins in a beautiful March day, which made our visit a pleasure to the senses. From the top of the town you are able to see all the surroundings and also how the topography has changed  during the passing of the centuries. 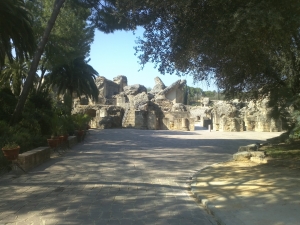 Entrance to the Acrópolis and Amphitheatre

This is a great scenario for understanding a bit more about Hispanic heritage and culture. The place heads to Sierra norte of Seville Province and Guadalquivir river beds and this is where we drove after our little walk among the ruins. 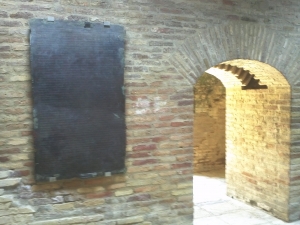 We (Bev, Bruce and me) drove from Santiponce (the town where the ruins are now) to Cazalla de la Sierra. This town is also an ancient settlement where you can enjoy fresh air and beautiful forrest and Dehesas.  The Spanish dehesa is a traditional Mediterranean agrosilvopastoral  system. It might be regarded as one of the most successful and efficient examples of how extensive agrosilvopastoral management is not only compatible with nature conservation and sustainable rural development within its environment, but also necessary for the achievement of both goals. It is marked by two fundamental features:  Mediterranean climate and low soil fertility. 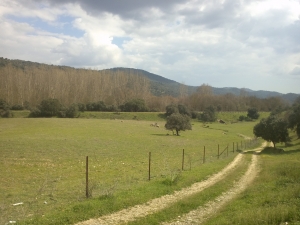 It is all a show of well living between humans, animals and trees and a beautiful landscape indeed.

Cazalla de la Sierra is famous for its magnificos and esplendidos aguardientes (liquors) to the point that, in some cases you may hear someone asking for it at the bars by the name of Cazalla like: “Un Cazalla, por favor”.

These liquors are great for drinking them in sips after a big meal during the winter as they are made with aniseeds, cherries, etc. But it was too early so we decided to have some tapas as a snack and continue our road trip till Constantina watching the Bulls, sheep, rivers, mountains, etc, on the way. 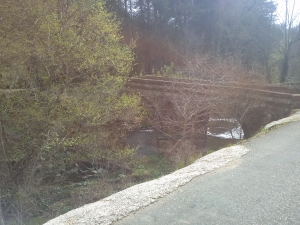 There we made a stop for lunch and coffe, and, of course now, a “cazalla”. But instead of having it at any bar, we went to one of the most famous and legendary factories situated in this town: “La violetera” . The origin of the name is a very interesting and long story as it was given after a famous Spanish actress and one of her movies. The actress is Sara Montiel. 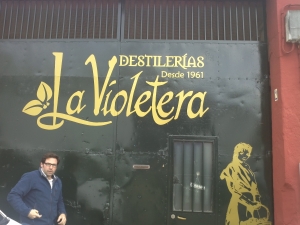 Jaime, the owner and founder’s Grandson

His owner received us and explained with detais how was the process and after it we tasted it with so much delight. It must be said that these liquors inspired to the most important poets and writers in Spain during centuries and many other “Bandoleros” warmed themselves with these strong but gentle drinks in the cold winter nights of Sierra morena after their adventures in the Andalusian roads. But this is another story for another post maybe…

If you want to join in these experiences, contact us and we’ll be more than glad to take you learning the language and the local expresions with fun.