The linguistic bubble. How far is language teaching business going to get?

The linguistic bubble. How far is language teaching business going to get?

Here comes a very controversial matter. Last June 12th, El País (a Spanish newspaper) issued an article about the growing amount of new language schools in the country. Something described as “the linguistic bubble” comparing this phenomenon to the former “real state bubble” and denouncing the fact that many of these new schools are not authorised for preparing people to official examinations and lack of the necessary tools for doing so.

It must be pointed out that many universities and companies ask for these diplomas (FCE, CAE, TOEFL, TRINITY, etc) as one of the main requirements for entering a degree or a job position. It does not affect only to English as a second language (being this one the most important) but also German, French and Chinesse. But it is English the most controversial for being the most demanded.

The author denounces that these schools are adevertising their courses with very low prices which negatively affects to their quality and, besides, to the prestige of the rest of the rest of schools which have been doing this for decades. It is a new line of business that has increased its activity over a 30% in the last 2 years, El Pais says.

The regulatory authorities and the representatives of Cambridge and Trinity (among others) in Spain are trying to take some control of this situation which, in turn, is not totally ilegal or fraudulent as they use names of examinations but not logos or brand symbols. Hence the controversy of the matter.

Just in a few words, there are some people that is taking advantage of the great necessity of learning foreign languages in Spain at any cost and by any means. This affects obviously to professionals who really love their job and want to teach languages enjoying their student’s learning. It also affects to seriuos institutions which have been doing this for long.

I would like to give some information here to throw some light over this situation affecting students, schools and teachers. First of all, there is not any national nor European authorised diploma for second languages. Neither there is any national nor European general policy for authorising the levels proposed in the COMMON EUROPEAN FRAMEWORK OF REFERENCE FOR LANGUAGES. The only true fact here is that there are some international institutions which are recognised enough to be taken as “official diplomas”. But this just occurs because their importance in the international academic spheres. 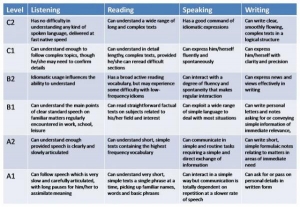 Every company or university take its own decision on which is the most appropriate diploma for their requirements. There’s no agreement nor any standard generally followed for this issue.

This undergoes very bad consecuences like low hiring salaries, hiring native speakers as teachers when they are not, poor content for classes, etc. It is just tiring students, making them hate what they are learning and a very long and disgusting list of negative matters.

We just want to back all professionals which take seriously their job and really have a vocational career. Besides, I want to clarify that Global Language Training offers custom courses and also prepare people for those official examinations on demand, but we do not publicite ourselves as official examiners. We motivate students to learn in the best way and more convenient path for them.

Here comes the best advice: Learn something new, but do it with love and motivation, otherwise it would be difficult and tedious. Teachers, please do so…